The Cinque Terre – recognized in 1997 by the Unesco Mankind's World Heritage – is one of the most characteristic scenarios of the Ligurian Riviera and of Italy.
We will sail along the coast to discover the Cinque Terre National Park and the enchanting villages of Monterosso al Mare, Vernazza, Corniglia, Manarola, Riomaggiore. Each of these breathtaking locations is unique.
Every village can be easily recognised for its different conformation, natural position in the local landscape, and distinctive personality.

Whilst sailing towards our destination, we might stop off for a relaxing swim or a surprising snorkeling session to discover the underwater environment. This marine area is indeed characterized by different seabeds and several species of flora and fauna.

By choosing to explore the Cinque Terre with us, you will have the opportunity to admire one of the most appreciated scenarios worldwide in a unique way.
Discover the peculiar corners and enjoy the traditional cuisine of these marvelous places which have always served as a beautiful background for selfies and pictures, but have also been recently chosen as a background for the story of the upcoming Disney Pixar cartoon, Luca. 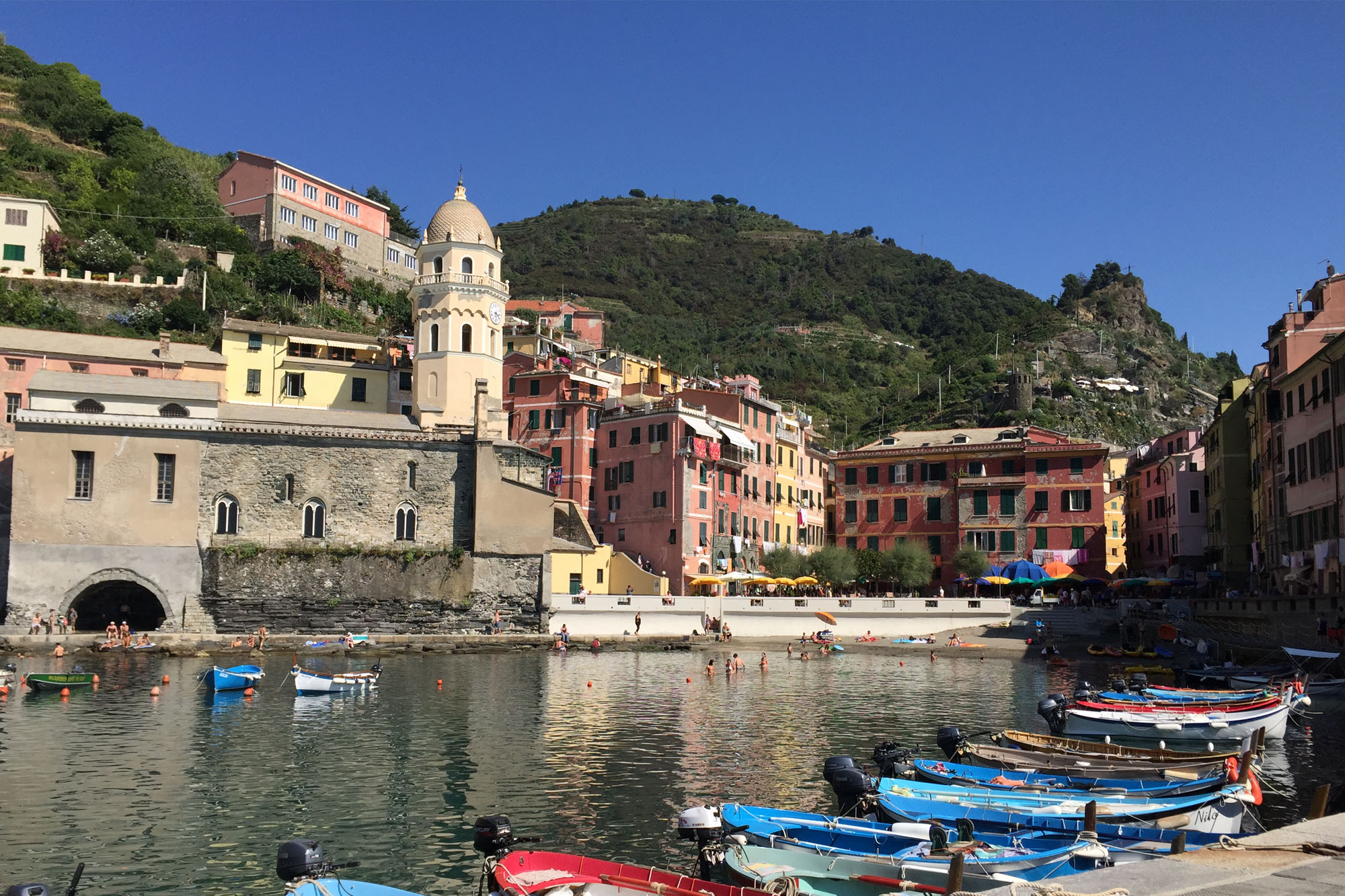 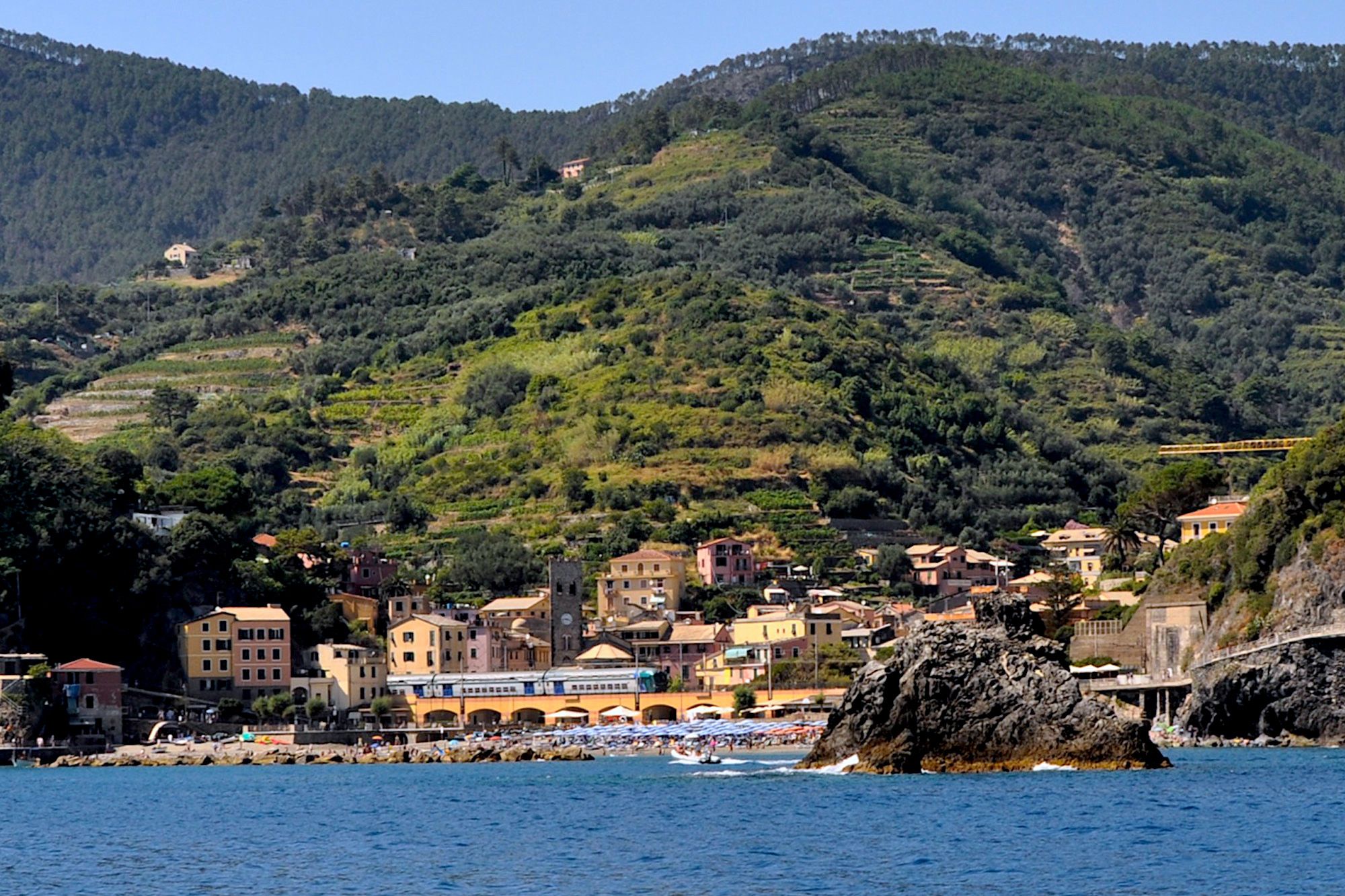 Monterosso al Mare is located at the centre of a small natural gulf, protected by a small artificial reef, to the east of Punta Mesco in the Riviera of La Spezia. It is the westernmost town of the Cinque Terre.

In the west part of the original village, beyond the hill of the Capuchins, there is Fegina, the natural expansion of the village. It is characterized by a relatively modern tourist resort facility and it is reachable through a tunnel of a few tens of meters.
The local train station is located in Fegina and the beaches are relatively larger compared to the narrow cliffs that characterize the other villages of the Cinque Terre.

According to some historical sources, the first human settlement – called Albareto – arose in the immediate heights of the current municipal area of Monterosso. Some burials of pre-Roman Ligurians were also found in the village.

Nowadays, this area is renowned for a fishing activity linked to the "step of the anchovies" which are caught with the aid of a lampara.

The "step of anchovies" is carried out traditionally on St. Peter's Day (June 29) and it gives rise to a salting activity, with the production of salted anchovies which has obtained the recognition of "Slow Food presidium".

While in Monterosso, you don't want to miss the characteristic vine terraces and the local production of particular wines such as sciacchetrà.

Vernazza is one of the five towns that make up the Cinque Terre district.
It is the second village coming from the west. Vernazza's name is derived from the Latin adjective verna, meaning "native".

Its territory is characterized by the typical vine terraces.
According to an estimate, these terraces extend for over 7,000 km and are made of dry stone walls, which are typical of the Ligurian coasts.

Several hiking trails start from Vernazza and act as a link between the Cinque Terre villages. Two important trails are the wooded path (marked with the number 507 by the CAI) that crosses the hamlet of Casella – in the municipality of Riccò in the Gulf of La Spezia – and the "Sella della Cigoletta" which connects the coast with the middle and lower Val di Vara.

The village has been developed along the Vernazzola stream (now covered) which constitutes its central artery.

Vernazza has an exceptionally intact urban pattern, divided into a series of alleys and steep stairways on the top of which the sanctuary of Our Lady of Reggio oversees the surrounding land from an altitude of 325 meters above sea level.

The set of its natural and historical aspects make it one of the most beautiful villages in Italy. 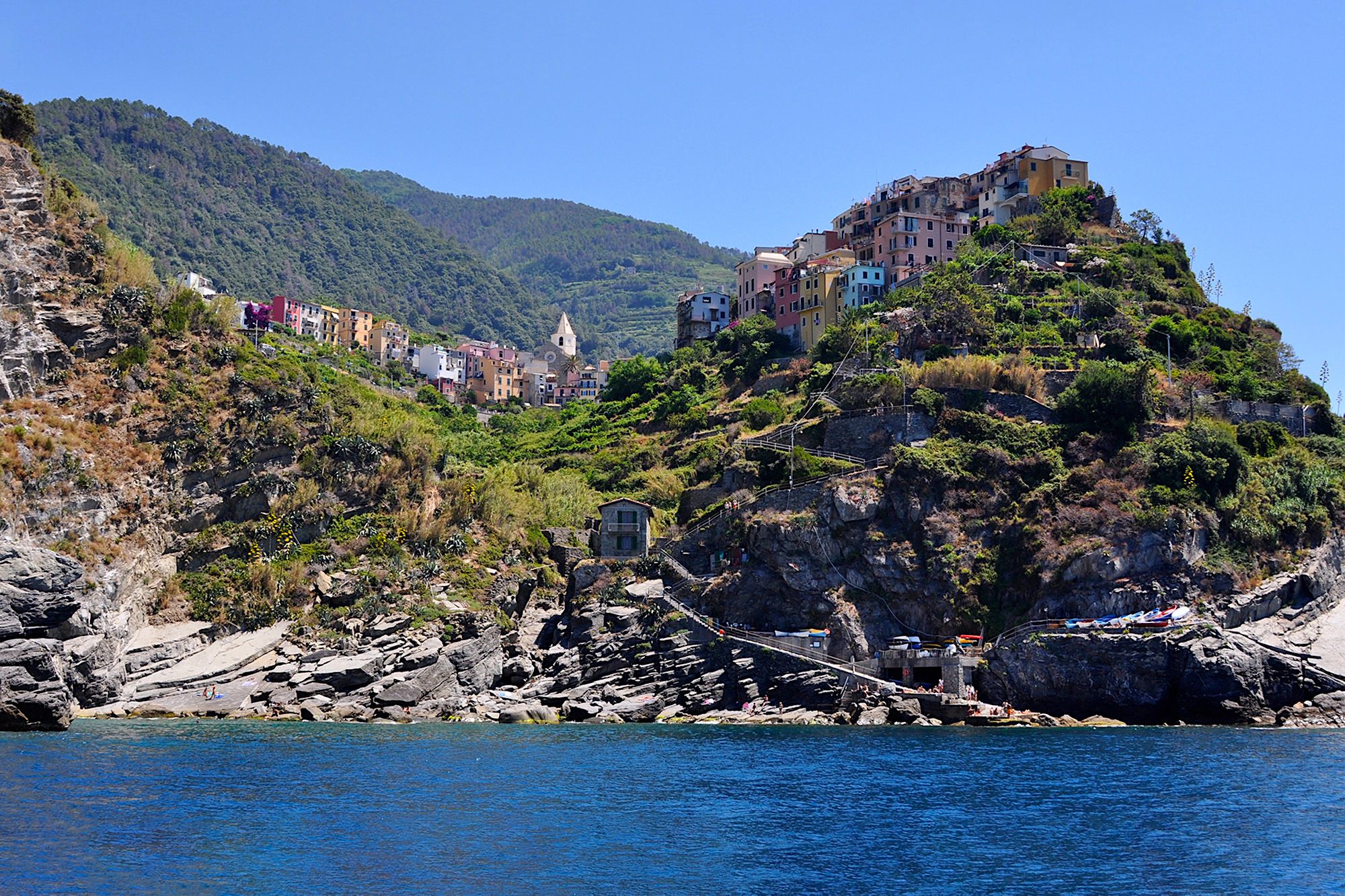 The origins of the village of Corniglia date back to Roman times. Corniglia's name is probably derived from Gens Cornelia, a Roman family that owned the territory.

From a geographical point of view, this hamlet is set in a central position with respect to the other villages of the Cinque Terre.
It is located to the east of Vernazza and of Monterosso, and to the west of Manarola and Riomaggiore.

Corniglia is different from the other villages of the Cinque Terre as it is the only village that does not directly overlook the sea but is located on the top of a promontory about a hundred meters high, surrounded by vineyards on characteristic terraced bays, except on the side looking out to the sea.

To reach Corniglia from the train station, it is necessary to climb the "Lardarina" – a long brick flight of steps composed of 33 flights with 382 steps. You may also follow the winding road that, from the station, leads to the village.

You can reach Corniglia from Vernazza by following the hiking trail that climbs between crops and the Mediterranean scrub up to Prevo (m 208) and then crosses the Guvano landslide and the Rio della Groppa before descending to Corniglia.

Like its fellow Cinque Terre towns, Manarola is nestled between the Ligurian Sea and the steep mountain range detaching from the Apennines and descending towards the South-East, forming a watershed between the Val di Vara and the coastal area.

The town is located in the final stretch of the valley of Groppo stream.

The origin of the village finds its roots in the migration of populations from the Val di Vara and from the nearby Roman settlement of Volastra who decided to move towards the sea in order to exploit its resources.
The name "Manarola" probably derives from the Latin "Manium arula", which means "small temple dedicated to the Mani", even if this etymology still remains very uncertain.

The houses are colourful and tall, built according to the typical Genoese tower house structure.
They overlook the main street, via Discovolo, which was built by covering a river.
The town climbs up the rocky ridge that juts out into the sea, creating intertwining narrow alleys which run in parallel on several levels and are connected to each other by uneven slate stairways.

Three of the other villages of the Cinque Terre are located north-west (Monterosso, Corniglia and Vernazza) and one south-east (Riomaggiore). Manarola is the second smallest municipality in the area, after Corniglia. 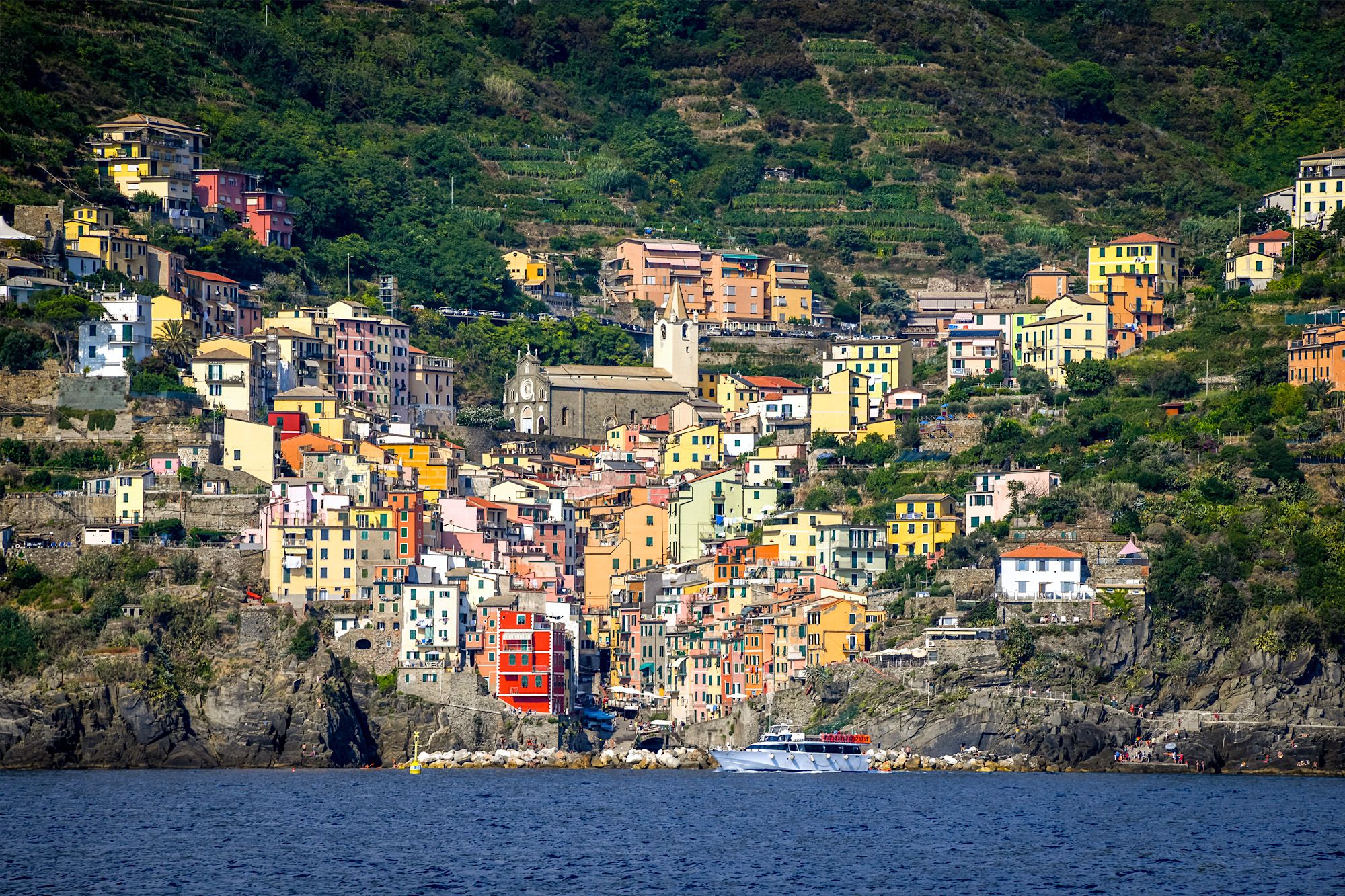 Like its fellow Cinque Terre towns, Riomaggiore is nestled between the Ligurian Sea and the steep mountain range detaching from the Apennines and descending towards the South-East, forming a watershed between the Val di Vara and the coastal area.

The historical centre, whose original nucleus is dated to the 13th century, is situated in the valley of the river Rio Maggiore, the old Rivus Major from which the village takes the name.
The Genoese tower houses which compose the urban net are located along the steep course of a stream and are a true peculiar feature of the old town.

The railway station is on the Genoa-Pisa railway. It is part of a more recent neighbourhood which was built in the second half of the nineteenth century. Riomaggiore railway station is located in the adjacent valley of the Rio Finale stream (Rufinàu), which once marked the border between the lands of Riomaggiore and those of Manarola (Manaèa).

The two valleys on which the town stretches are separated by the steep coast of Campiòne (Canpiòn), on the lower part of which stands the castle of the village. The Rio Maggiore valley is surmounted by Mount Verugola (Verügua), whose three peaks, depicted in the municipal coat of arms, have always its symbol.

Ligurian cuisine consists of traditional dishes that make use of both local products – such as preboggion, a mixture of wild herbs – and ones imported from areas with which these lands have had frequent contact over the centuries, such as Sardinian pecorino which is one of the ingredients of pesto.

Due to its history, roots, and products, Ligurian cuisine is one of the best expressions of Mediterranean flavours. It is a relatively poor cuisine made of simple, common and cheap dishes, but it has always been imitated and sought after thanks to its unique traditions and preparations.

The following is a list of the main product categories which best summarizes the great elements of our cuisine:

The combination and preparation of all these elements result in a simple, genuine, and varied cuisine renowned all over the world.

We hope you will stop by one of the restaurant to taste some pesto, pansotti with walnut sauce, the famous focaccia with cheese from Recco, the pasqualina cake, farinata, and other dishes based on local and traditional recipes. 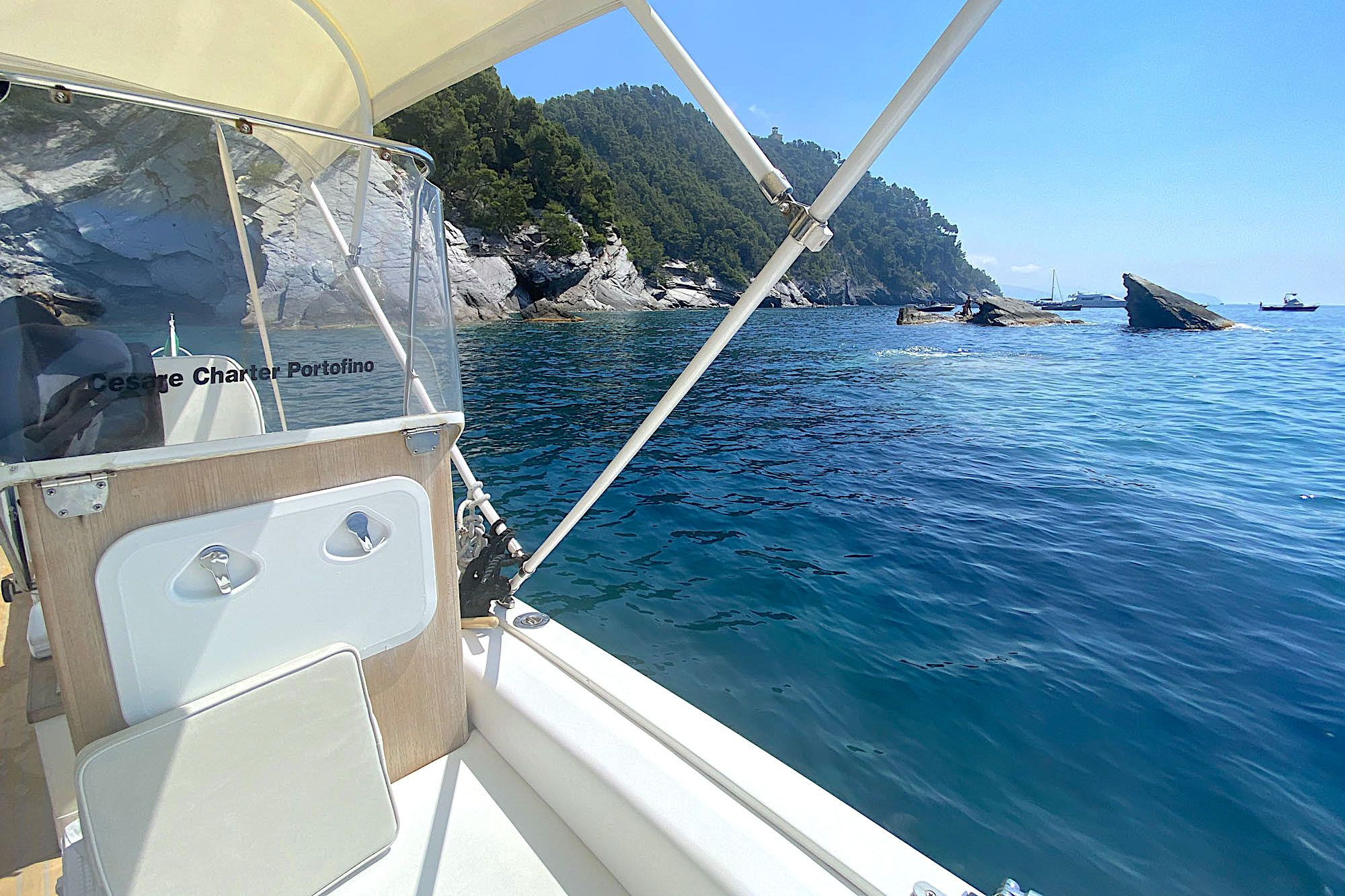 Liguria has been strengthening its position for earning the largest number of Blue Flags for years.
The Blue Flag is an important recognition and award assigned to seaside tourist resorts for crystal clear waters and seaside services at their best. In 2020, 32 Ligurian beaches and 14 landings were awarded the important and prestigious Blue Flag.

This recognizes the important role Liguria has in the national tourist panorama, guaranteeing high-quality assurance both in the safeguard of the environment and in the services provided.

All of these aspects constitute the strong assets of our land, which must be appreciated, enjoyed, and safeguarded at the same time.

Our aim is to share the beauties of the most breathtaking and unspoiled corners of our coasts with our guests, allowing you to relax in one of the stops that you can make for a relaxing dip in clear waters or a short snorkeling excursion to discover the beauties of the underwater world.

Luca: Pixar and the Cinque Terre

Luca is the first Pixar film set in Italy, signed by Enrico Casarosa, the Genoese storyboarder of Cars, Ratatouille, Coco, Up. Luca will be released in theaters in June 2021.
Enrico Casarosa is famous for having directed the short "La Luna" in 2011 and was nominated for an Oscar. With his first feature film, Enrico tells a story inspired by his childhood spent in Liguria many years ago.

Luca can therefore be considered as an alter ego of the director. He is a little boy who enjoys his summer in the Cinque Terre. Luca spends his days among local old men playing scopa (a major Italian card game) and new encounters, intending to live a holiday made of freedom and adventure. Then, one day, he meets a child - Alberto - who soon becomes his new best friend.

All this fun is jeopardized by a deep secret: it turns out that this new friend is a sea creature from a world located just below the surface of the water.
Enrico, who is Genoese by birth but has been living in the United States for thirty years, said about his work:

“This is a deeply personal story, not only because it is set in the Italian Riviera where I grew up, but because the celebration of friendship is the core part of this film. Childhood friendships often set the course of who we want to become and those bonds are at the centre of Luca's story.
Thus, in addition to the beauty and charm of the Italian sea, our film will tell an unforgettable summer adventure that will radically change Luca"
Casarosa goes on to describe the Cinque Terre area as: “A world that lies between the land and the sea. The perfect world".
Although the Cinque Terre needs no introductions due to its natural charm, we are sure that this tribute from Pixar and Enrico Casarosa will give further stimulus for all those forms of sustainable tourism that will be possible to resume once the present global emergency is solved. In fact, promoting and supporting sustainable tourism is the key not to distort this small Italian paradise that we have the honor (and the responsibility) to safeguard and that the whole world envies us.

Source: Interview by Angelo Carotenuto on the cover of "Venerdì" - February 19, 2021. Read the full article here.